If you’re out and about in Paisley this weekend with kids (or maybe you’re just a kid at heart!) then the Paisley Pumpkin Halloween Trail is a fun, socially distanced activity to keep the whole family entertained. At Rainbow Turtle we’ve got this cheeky chappy to tick off your list, and if you pop into the shop we’ve also got maps of the trail and plenty of Fair Trade sweets on sale to keep your energy levels up!

With the colder weather starting, it feels like time to make warming and tasty meals – like this Malaysian Curry with Kilombero Rice recipe, developed by our friends at JTS. Several of the ingredients can be purchased from the Rainbow Turtle shop!

If you enjoyed this lovely curry, see here for more JTS recipes! 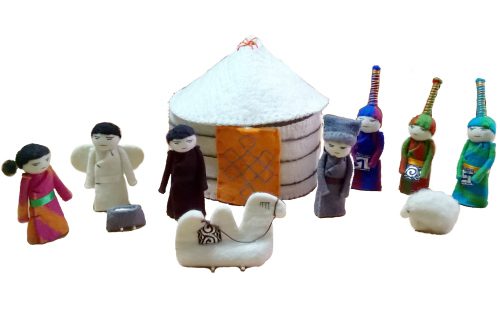 Mary & Martha Mongolia supply several of our lovely craft items, ranging from Christmas decorations to socks! Watch the video below to learn more about their background and their Fair Trade principles. Of particular interest might be the story behind the recycled glass angels, which we sell many of each Christmas!

You are cordially invited to Rainbow Turtle’s AGM on 6th October 2020 at 7pm. To attend our online meeting please sign up here.

The meeting will provide you with an opportunity to hear about the charity’s progress during 2019/20, its financial position as of 31/3/20 and members will have the chance to elect the board of trustees for the coming 12 months. Once you have registered for the meeting you will be contacted closer to the date about joining instructions.

The agenda for the business part of the evening is:

Following the business portion of the AGM we will be delighted to welcome Tracy Mitchell, managing director of JTS Fair Food Fine Food, as our guest speaker. She will be talking about “JTS – The Global Pandemic And The Supply Chains”. After her talk there will be an opportunity for attendees to ask questions.

This month is Organic September and the Soil Association, who organise this annual campaign, think that the ever-changing times we now find outselves in are even more of a reason to get involved in the movement. They say:

This year has brought more changes to our world than anyone could have foreseen. With more of us seeking solutions to help restore nature, health and a safe climate, becoming part of the organic movement this year can help make a world of difference.

To celebrate, we’re going to revisit our blog post from last year and take a tour through just some of the organic products available at Rainbow Turtle…

“Organic September is a month-long campaign designed to encourage more people to try organic as a way to promote and educate people about organic food & farming practices.
Following a year of unprecedented environmental protest and ground-breaking research, there’s never been a better moment to shout about the role organic farming has to play in the climate change debate:
🌿 Benefiting nature
🐝 Wildlife
🌍 The planet
🌾 And building healthy soils.
Campaigning for more organic food and farming means that together, we can slow down climate change.”

At Rainbow Turtle, we sell a wide variety of products which are not only Fairtrade certified, but organic as well because we believe that Fair Trade should care about the environment, as well as about people. These products include:

Schools in Scotland have been back for a good while now, and the rest of the UK is following suit this month, so it’s a good time to think ahead to how we can continue to include Fair Trade in the curriculum over the coming months in these challenging times.

To celebrate September’s Global Citizenship month Highland One World have launched their Wee Flags for Change challenge to design a flag based around a commitment to one positive action on a global issue (perhaps Fair Trade?) and share a socially distantanced campaign video.

September is also the month of the Scottish Fair Trade Forum’s annual awards to recognise and celebrate the achievements of individuals, groups and organisations who make Scotland a Fair Trade Nation. If your school’s Fair Trade group has done something really special over the last year why not nominate them here by Monday 14th September. The awards will be presented virtually in November.

An easy and fun way for pupils to learn about Fair Trade is to screen some short films, such as the recent series on a family of cocoa farmers produced by the Fairtrade Foundation. These are suitable for viewing in school or at home and include an activity pack.

World Cotton Day is coming up on 7th October, which is a good opportunity to investigate a Fair Trade product that isn’t one of the usual suspects like bananas or chocolate! The Fairtrade Foundation have collated information and activities here.

If you would like more ideas or help with Fair Trade activities in the classroom you can contact our Education Officer here.

This week we have a guest blog from one of our trustees (who wishes to remain anonymous), reflecting on this difficult period we’ve just come through.

What can we learn from this crisis?

What have been your experiences during this crisis? How have you found strength? What might be some lessons we could learn? What would be your hopes for the future?

At Rainbow Turtle we have come through the shop being closed and our educational activities curtailed. There was no scope for normal business. Shutters and doors remained closed. None of our customers, volunteers or staff could be there to bring life to the shop. “Business as usual” had disappeared. It was a time of not functioning.

Yet, after a time, a spark of hope emerged, thanks to people and to technology. Management and volunteers worked together in outreach to customers online. And our customers responded with enthusiasm. We have learned that while things have changed, there is still deep generosity in people and a real desire to be part of making things better.

Some people hope for a return to “business as usual” and to go back to the way it was before. Some people hope for more change so that society can be transformed. We cannot predict what will happen but we can be part of a fresh start. Rainbow Turtle is one place where we can do this. Your purchase is part of making things better. You contribute to stability of income for producers and to caring for our environment. Both of these are crucial for the well-being of people and planet. You are our hope for the future.

Further reflection:
Radio 4 Analysis with Margaret Heffernan: Thinking for the Long Term
BBC Radio4 Khamal Ahmed in Mohammed and the Market
Or for “online conversation with leading public thinkers”

You may remember that in June we promoted a Crowdfunding campaign from the Scottish Fair Trade Forum to support Fair Trade suppliers (like us!) to survive the Coronavirus pandemic. We’re very pleased to update you all that the campaign raised a total of £9000 and Rainbow Turtle successfully applied for a portion of this money. So far, we’ve used the funding to make our shop a bit safer for volunteers and for customers with a protective screen at our counter, and we’ve restocked the shop with lots of Fair Trade treats!

Many thanks to the Scottish Fair Trade Forum for organising this campaign, and to all who donated.

Remember we’re still operating our click and collect service! Just order before midnight on Sunday here and collect on Wednesday at an agreed time. The shop will also be open on Wednesday between 11 and 2 so if there are gaps in our collection schedule you can pop in for a browse! All we ask is that you first have a look through our windows to check if there’s another customer in already, and follow our simple guidelines.

Rainbow Turtle successfully launched its click and collect service at its Paisley shop today. The shop is now open on a Wednesday for customers who have ordered through the website.

Each customer is allocated a 15 minute interval between 11am and 2pm to pick up their order. Needless to say, they can also add to their order at the time or get refills for their Ecover cleaning products.