We were asked by the Scottish Fair Trade Forum to choose a photo that represents why we’re so commited to Fair Trade, and why their crowdfunding appeal is so important to us. This picture is from Fairtrade Fortnight 2020, and shows the day Colum (our Director), Gemma (our Shop Manager and Education Officer), and Clotilde (one of our enthusiastic volunteers) had the pleasure of meeting Ndiuzayani Zaya and Aubrey Meki Chilenje from the Fairtrade Certified Kasinthula Cane Growers Association in Malawi. Ndiuzayani spoke about her mother’s work as a farmer with the Fair Trade sugar association; thanks to its certification, all of Ndiuzayani’s education was funded by the Fairtrade Premium. Aubrey also talked about his membership with the Association, their work with Fairtrade and what it had done to help improve livelihoods in the community through healthcare, clean water and other projects to alleviate poverty. Both of them did not shy away from speaking of the challenges of making a profitable living from sugar, though. It was an incredibly powerful experience to meet them and hear their stories, and we’re proud of Rainbow Turtle’s commitment to selling Divine Chocolate who buy their sugar from Kasinthula.

With most schools around Scotland and the UK now closing indefinitely, many parents and carers will now be in the position of teaching their children in a way that they haven’t before. So while schools will be providing classroom materials to make sure that the important basics of literacy and numeracy are being covered, you might want to also consider expanding your child’s knowledge of the wider world by talking about fair trade with them.

They may have already covered this at school during the recent Fairtrade Fortnightcelebrations, in which case they may be able to educate you! The Fairtrade Foundation have loads of resources on their website, with everything from activities for very young children to projects for older learners.

The IDEAS network are also a great source of information and learning resources on fair trade and global citizenship more widely. Their Signposts website has lots to get you started.

Our own Education Officer, Gemma, will also be more than happy to answer any questions you might have, or point you in the right direction for further resources. You can contact her here.

Today we were lucky enough to have a visit from Malawian sugar producers, Nduzani and Aubrey, organised by the Scottish Fair Trade Forum, in conjunction with ourselves and the Renfrewshire Fair Trade Steering Group.

First, Nduzani and Aubrey visited Bargarran Primary School in Erskine to speak to pupils from Bargarran, St John Bosco and Rashielea about all of the work that goes into growing sugar cane and how the support of the Fairtrade Foundation helps them to grow their business and support their communities. All three schools had lots and lots of questions for the sugar producers, covering everything from housing, climate change and the weather in Malawi to how to defend your crops from snakes and elephants!

After our visit to Bargarran, Nduzani and Aubrey were then whisked over to the Rainbow Turtle shop to have a look at (and a taste of!) our selection of Divine chocolate, which their sugar cane is used to make. It was a very enjoyable and very informative day!

Saturday night’s ceilidh, to mark Fairtrade Fortnight and the closing of the Roots Festival, was a huge success. About 80 people of all ages came along to the event at The Wynd Centre in Paisley to listen to the fantastic music by renowned ceilidh band, Haud Yer Lugs.

The ceilidh was such a success that it managed to raise over £700 for Rainbow Turtle. Thanks to Roisin for the photos. Note that people were moving so quickly around the dance floor that they were just a blur!

We thought you’d like to make a “leap” into Fairtrade Fortnight this year with a fundraising ceilidh for Rainbow Turtle. Starring the renowned ceilidh band, Haud Yer Lugs, this year’s ceilidh will be held in the Wynd Centre in Paisley on Saturday 29th February at 7pm. Tickets will be on sale in the Rainbow Turtle shop, priced £5 or £20 for a family. Tea and coffee will be provided.

This year’s Fairtrade Fortnight (February 25th to March 10th) was themed around cocoa production and also looked at the empowerment of female farmers – about a third of the producers of Divine Chocolate are women, so they deserve a say! 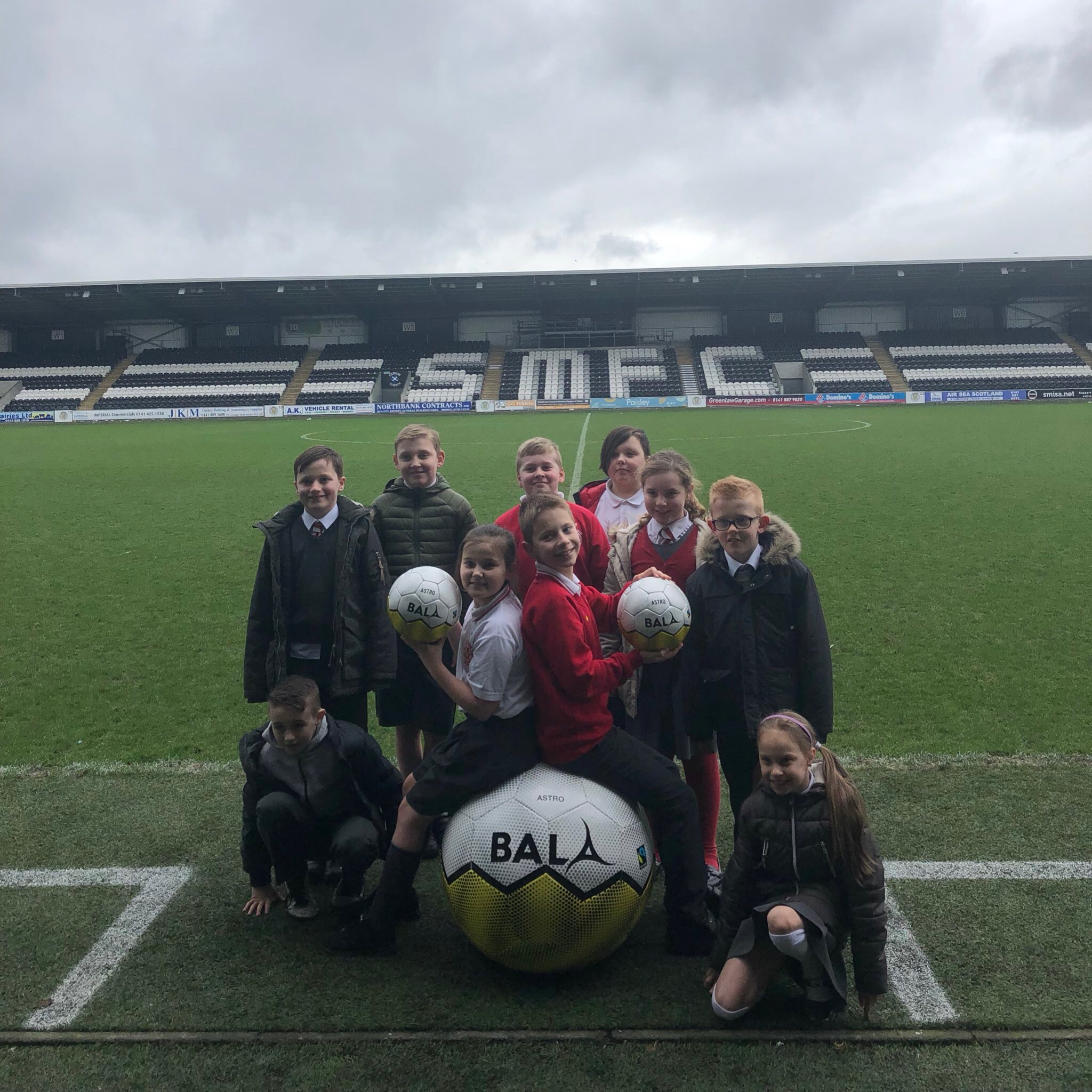 To celebrate Fairtrade Fortnight, Rainbow Turtle organised two schools conferences. For local primary school pupils, we arranged a visit to St Mirren Park, to hear from Bala Sport (who produce Fairtrade footballs), WOSDEC, St Mirren Women’s Football Club, and from Rainbow Turtle. It was a great day, with lots of learning about the work that goes into making a football, the benefits of Fairtrade for football workers, and also the parallel difficulties of being a female farmer/producer and a woman in sport. And the amazing news to come out of the event is that St Mirren WFC are now using Fairtrade footballs for their matches! 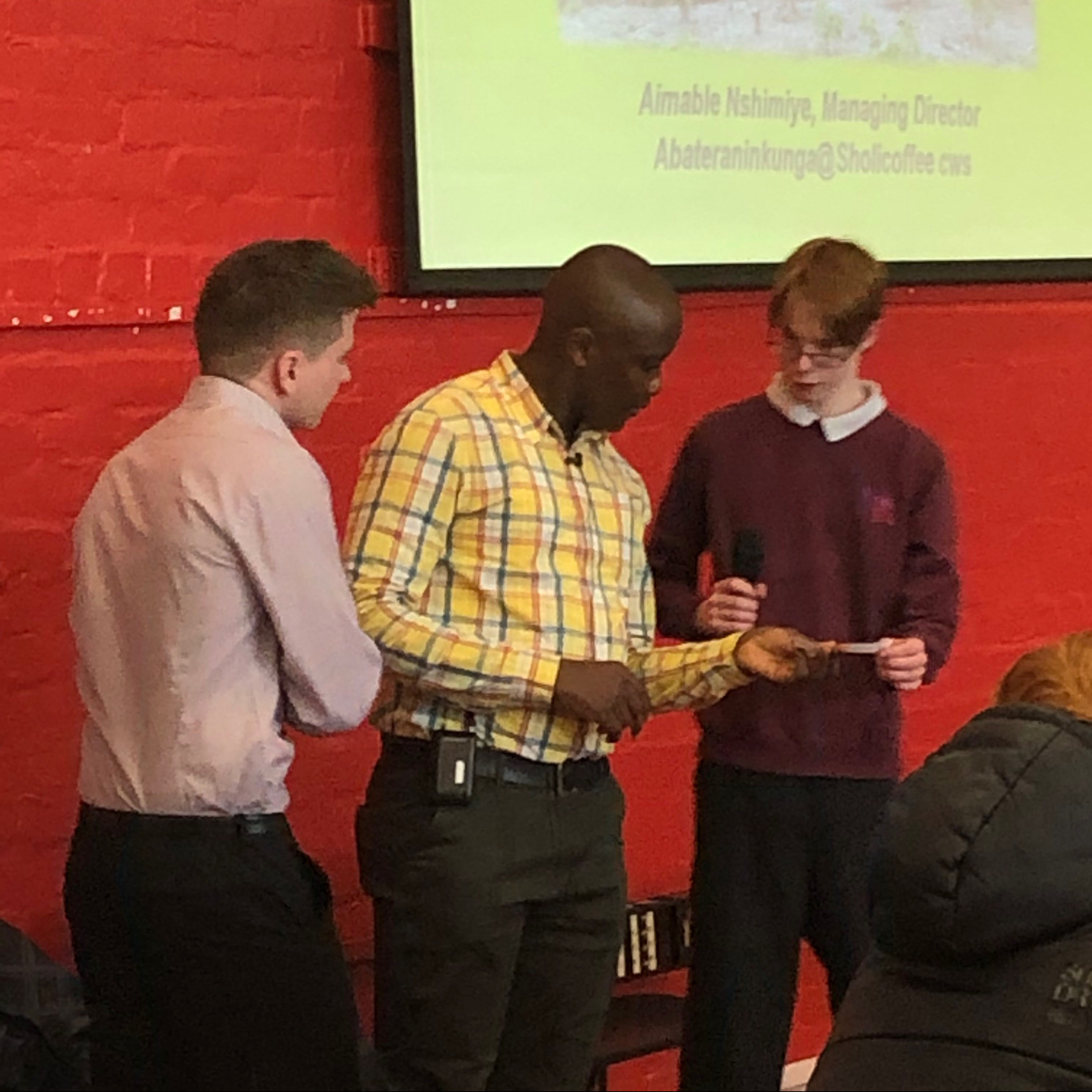 For secondary school pupils, Rainbow Turtle, in conjunction with the Scottish Fair Trade Forum, organised for Aimable Nshimiye, a coffee producer from Rwanda, to visit Mary Russell School and speak about his business and how becoming Fairtrade certified has helped them to grow. The Mary Russell pupils had thought up some interesting questions for Aimable in advance! Rainbow Turtle are very grateful to the Renfrewshire Fair Trade Steering Group for their support in organising this event, as well as the one at St Mirren Park.

Other activities which took place during Fairtrade Fortnight 2019 included a Fairtrade Bake Off at Gryffe High School, which we were lucky enough to be asked to help judge – look at those amazing cakes! The winner (which we don’t have a picture off because it was scoffed too quickly!) was judged to be best because of its delicious taste, its perfect appearance, and most importantly its high quantity of Fairtrade ingredients!

It was fantastic fortnight, and so encouraging to see the real engagement with Fairtrade Fortnight and the ideas of Fair Trade that so many local schools and organisations have!